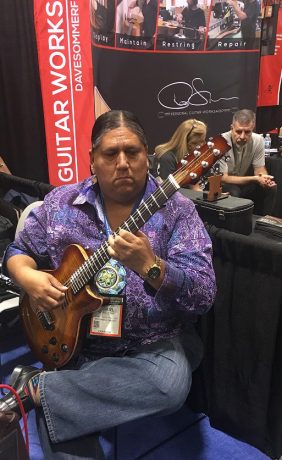 A member of the Yaqui people of southern Arizona, Gabriel Ayala(Guitarist) is at the forefront of a new generation of Native Americans making a career performing classical music. He earned a Master’s Degree in Music Performance from the University of Arizona in 1997, has taught at all educational levels from elementary through college, and serves as a competition adjudicator. Although Gabriel truly enjoys being a teacher his busy touring schedule allows him to only teach in masterclass settings.

Ayala performs regularly throughout the United States and has appeared at the Poway Center for Performing Arts, John F. Kennedy Center for the Performing Arts, National Museum for the American Indian, and Oscar Meyer Theater in Madison, Wisconsin. In 2010, Gabriel was honored to perform at the Musical Instrument Museum in a series called “Guitar Masters”. He has been recognized by the former State of Arizona Governor Janet Napolitano, now Director of Homeland Security, for his musical achievements. In addition, he has also been honored as the Artist of the Month for the Indigenous Internet Chamber of Commerce (IICOC). Not only is Gabriel recognized locally and in the United States but has had the opportunity to be the featured performer at the “Festival Internacional de la Guitarra Academica” in Venezuela with Performances in Caracas, Guarenas, Guatire and on National Public Television throughout Venezuela.

Gabriel was selected as one of ten musicians featured in “Native Musicians in the Groove” highlighting stories of musicians in their struggles while persevering with a career in music. He also has been featured in several media publications such as “Native Peoples”, “Indian Country Today”, “SAY Magazine” (Canadian and United States Editions), “Spirit of the Southwest (German Publication)”, “Native America Calling”, “Canadian Broadcasting Corporation” and numerous others.

Ayala has released three self-distributed albums: “Self Titled” in 2003, “I’ll Be Home for Christmas” in 2007 and “Tango!” in 2008. He has also been a featured artist on several other CD releases. Gabriel has been breaking stereotypes amongst Native and Non-Native people by performing classical, jazz, flamenco, and new compositions of his own which he highlighted on his 2010 release of “Remembrance”. Also recorded in 2010 is the CD entitled “Passion, Fire & Grace” which showcases the genre “JazzMenco” created by Gabriel. He is an award winning artist in several music award shows including the Native American Music Awards “Best Instrumental CD (2009)”, “Best World Music (2010)”, and “Artist of the Year (2011)” and the Canadian Aboriginal Music Awards “Best International Album (2010 and 2011)”. Gabriel also received the 2011 Tanner Award from the University of Arizona’s American Indian Alumni for his significant success in his professional career. His contribution and leadership provide a benefit to American Indian communities. Gabriel received many accolades in his career among them is the honor of sharing the stage with Motown living legends The Four Tops, The Temptations, Richie Havens, Dr. John and many others.

As Ayala continues to travel throughout the United States and other countries he serves as an advocate for education for all youth while instilling his values of living a traditional lifestyle while abstaining from Alcohol, Drug and Tobacco. Gabriel believes in leading our children in the right direction through his philosophy, “Love your children, Honor your elders, and Respect your women”. Gabriel wants to share the gift of music with as many people and show children that they can become whatever they dream. Gabriel currently resides in Tucson, Arizona.